Written by: Matt Johnson for SaskSport

Ben Coakwell has an interesting way of explaining travelling in a bobsled going 150 km/h down a track.

“It’s like if you're inside a tin garbage can rolling down a hill, but that hill was also taking off in an airplane, so you'd get that feeling of take-off, but also the bumps while rolling down a hill,” he said. “Every time a new guy comes out. I want to watch. I want to be at the top or the bottom and see what the reaction is going to be. It’s insanity.”

The Moose Jaw product attended his third Olympic Games in Beijing as a member of Bobsleigh Canada, a journey assisted by the Saskatchewan Program for Athletic Excellence, a grant that is supported by Sask Lotteries. Coakwell starred as the brakeman on Justin Kripps’ four-man bobsled team, which also captured silver and bronze medals in December during the 2021-22 IBSF World Cup Circuit. Those two medals elevated Coakwell to tie the Canadian record for World Cup medals won by a four-man brakeman with 17 overall and led to Coakwell being named the Sask Sport December Athlete of the Month.

Despite his success in the sport, bobsledding wasn’t on Coakwell’s radar when he was growing up.

Coakwell’s listing of Bo Jackson —the only professional athlete to be named an All-Star in the MLB and NFL— as his favourite athlete explains a lot. First, Coakwell was a hockey player and then a football player. He joined the University of Saskatchewan Huskies football team in 2005 as a running back and also starred on the Huskies track and field team as a sprinter. It was that combination that ultimately brought him to bobsledding.

“You need to be fast, but you also need to be heavy. And that's not two things that really go hand-in-hand in the athletic world very often,” he noted.

But Coakwell is an exception. Thanks to the presence of stats, measurables, newspaper articles and highlights, he was found by a recruiter with Bobsleigh Canada. It is a much different process now, said Coakwell, where aspiring bobsledders attend camps or programming like RBC Training Ground to show their stuff. 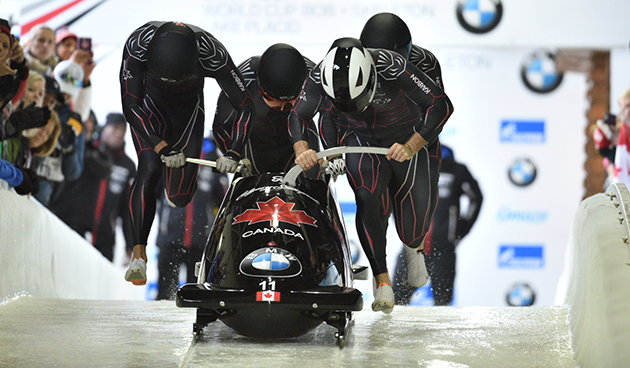 Coakwell’s introduction to bobsleigh came when he was contacted by a recruiter attending a track and field meet in Saskatoon. After exhausting his two remaining years of eligibility with the Huskies, leading the football team in rushing yards in both 2010 and 2011 and winning sprinting medals at the Canada West championship, it was time for him to turn his attention from university sport to the Olympic Games.

From the moment he tried it he was hooked.

“It's just a crazy expression of explosive power. It’s something that I can't explain to people and everybody gets it as soon as they try it. You get wrapped up in it and it's hard to get out of it.”

At the age of 34, Coakwell expects the 2022 Olympic Games to be his last. While he has interest in coaching after wrapping up his career, he first wanted to find his way to the Olympic podium.

Along with the bronze medal in Beijing, the team also won four gold, one silver and five bronze-medals at World Cup events since 2019. The group was named the Team of the Year at the 2019 Canadian Sport Awards. After a disappointing 29th place finish in his Olympic debut at the 2014 Olympic Games in Sochi that involved an on-track crash, Coakwell’s team finished 12th in 2018 in Pyeongchang.

Coakwell also understands what his presence at the Games meant for his hometown of Moose Jaw and the province.

“That's why we do it, that's why I do it,” said Coakwell, who is one of two Moose Javians who competed in Beijing. “The reason I've worked so hard at this is because I am a representation of the neighbourhood I grew up in and a representation of the people that taught me and the sports that I played in the communities in Moose Jaw and in Saskatoon.”

“When Canadians watch the Olympics, there's so many emotional attachments to sport, and I think that's a big part of it because they're watching people that grew up in their neighbourhoods and their towns. That's the reason we want success. It's not a personal thing as much as it’s a thing that you want to achieve to share with others.”