Like many other cultural organizations with members and activities around the province, the Saskatchewan Band Association (SBA) had already begun experimenting with delivering programs online. So when the COVID­19 pandemic threw a monkey­wrench into its normal operations in March 2020, it already had a blueprint for adapting.

“We are doing tons of online programming and lots of that has been quickly planned in response to the impact COVID­19 has had on the band community,” explained Suzanne Gorman, Executive Director, SBA.

The focus of this activity through the summer was an online band program providing individual rather than group instruction. The SBA, established in 1983, has been offering “wildly popular” in­person band camps for youth every summer for over 25 years. After the pandemic arrived, “we held on as long as possible before making the sad call to cancel all of the in­person camps,” Gorman said with a sigh.

That left “both youth and adult band musicians” clamoring for “something to do over the summer.” The answer was three distinct online programs open to anyone.

For adults, the Prairie Music Residency, normally held in Saskatoon in August, was transformed from an in­person program into an “online extravaganza.” Planned and delivered by the Saskatoon Brass Band with SBA as partners, the program was offered to participants who “Zoomed” in for the four days of sessions.

Gorman said increasing support for rural and remote band development had been a priority for the organization but with the cost of providing that support in­person, "we began looking into other options."

By November 2019, the SBA “already had a number of online systems, including a then relatively unknown thing called Zoom in place and tested,” Gorman said.

One result was the production of “an incredible series of instrument­specific educational videos for band musicians of all ages and levels.  We focused first on providing resources that band directors could use to keep students engaged…and it grew from there.”

“There is no way we could have done that – certainly not in such an incredibly short time – if we had not already been working on our online education plan, had a team and technology platforms in place.  COVID­19 was not the reason we made the transition to online programming… it just sped it up…a lot! ”

The SBA, with over 700 members – bands and individuals – is very appreciative of its lottery-­generated funding from Sask Lotteries.

Online is not for everyone, Gorman admitted, but students and adults who participated in the summer online programming have been appreciative and enthusiastic. The programs “allowed me to continue working on music to play with others,” said one student. “It took some of the pain away from not being able to play in a community band.” 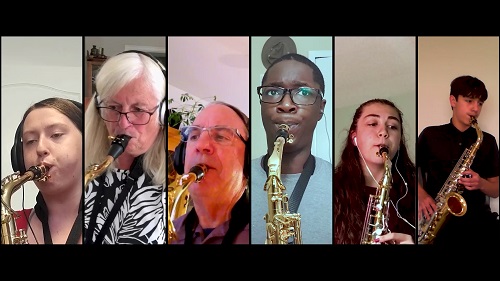