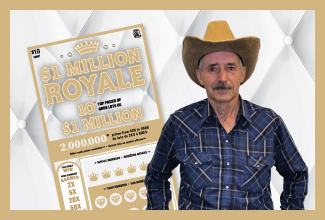 When it comes to birthday gifts, this one will be tough to beat.

After receiving a $1 MILLION ROYALE ZING ticket from his sister-in-law as a birthday gift, Ituna’s Peter Kwasnitza is taking home the ticket’s top prize!

Not a regular ZING player – except for when he gets tickets as gifts – Kwasnitza was shocked when he scratched his ticket and discovered he’d won $1 million – he had to enlist the help of his son and daughter to confirm by scanning the ticket on the WCLC mobile app and sending the result to them.

“I was excited, but at first I didn’t believe it,” he laughed. “But after they confirmed what I thought…I didn’t sleep much that night!”

Kwasnitza’s sister-in-law picked up the winning ticket back in May at the AG Foods at 530 Main Street North in Ituna. When Kwasnitza called her to let her know of his win, she was just as shocked as he was.

“She definitely thought I was pulling her leg,” he laughed.

Kwasnitza said he plans to share his prize with his kids and grandkids. Beyond that, he’s going to buy himself a quad and maybe a trip he’s wanted to go on for years.

"I’d love to get to Alaska one of these days,” he said, noting it’s something he’d look in to once it’s safer to do so.

Saskatchewan Lotteries is the main fundraiser for more than 12,000 sport, culture and recreation groups in communities across Saskatchewan.