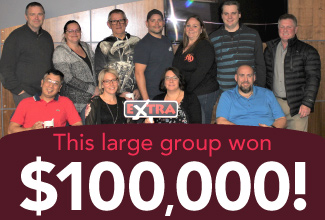 Tracy Ridgewell and 35 of her friends were thrilled to find out they’d won $100,000 together on the September 21 EXTRA draw.

“I got a call from the lottery office and they told me our group subscription had won $100,000,” said Ridgewell. “I started texting everyone in the group and told them to come see me quickly!”

“A lot of people thought I was joking with them,” she continued. “But everyone was so happy after I showed them the numbers. Some people even did a little dance when they heard the good news!”

“Most of us are going to put our shares toward bill payments or renovations,” said Ridgewell. “Some people want to use their winnings as fun money.”

Ridgewell and her lottery group have played LOTTO MAX and LOTTO 6/49 by subscription for some time, and they recently decided to add WESTERN 649 and EXTRA as well. They won their $100,000 prize about a month into their newest subscription, matching the last six EXTRA digits. The winning EXTRA selection on September 21 was 3912632.