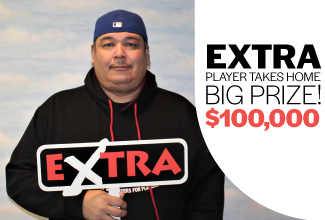 "Are you kidding me?"

James Lathlin knew his lottery ticket was a winner, but he was content to let it sit in his car for a few days. When he finally realized just how much he had won, the Saskatoon resident couldn’t believe it.

“I checked the numbers online, and I just saw I had the last EXTRA number,” he explained. “I thought it was a $2 win, so I left it in my cup holder for a while.”

Lathlin checked the ticket at a lottery retailer a few days later, intending to use his small prize to buy a new ticket. He had no idea what was about to happen.

“I looked at the machine, and it said it was a major prize,” he remembered. “The lady kept saying, ‘You won!’ I said, ‘What do you mean, I won? Are you kidding me?’”

The winner said he hasn’t yet made any major plans for his windfall. He added that he plans to pay some bills and save the rest for now.

Lathlin’s $11 LOTTO MAX and EXTRA ticket matched the last six digits on EXTRA to win the game’s second-highest prize. The winning EXTRA number on November 19 was 6892881.