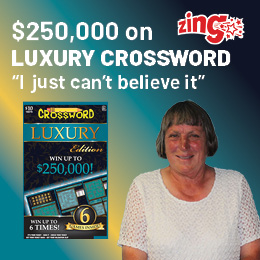 The decision to make a quick trip into a store while waiting for the bus proved to be a fateful one for Joan Fritsch. The Saskatoon resident is now $250,000 richer after taking home the top prize on a $10 CROSSWORD LUXURY EDITION ZING ticket she bought in early June.

“It’s still sinking in,” laughed Fritsch as she recounted scratching her ticket after picking it up from The $1 Store Plus at Confederation Mall (Unit 48, 300 Confederation Drive) in Saskatoon.

“I kept looking at it over and over and thought maybe something was wrong,” recalled Fritsch, who took the ticket home and kept examining until she “got the nerve” to go use a ticket checker to verify her win. The machine backed up what she was seeing: She’d won the game’s top prize of $250,000.

“I was just a package of nerves – still am!” laughed Fritsch. “I just can’t believe it.”

Fritsch said she’s still considering what to do with her windfall – possibly a change of living space and maybe a trip in the future. For now though, she said the money will “just help out where it can.”

Sask Lotteries is the main fundraiser for more than 12,000 sport, culture and recreation groups in communities across Saskatchewan.