April 29 was a big day for Jobindeep Singh. The Calgary resident stepped up to the BIG SPIN wheel, gave it a push, and walked away with $250,000!

The event was particularly significant for Singh as it comes as the result of his first ever time playing Zing tickets. He picked them up to celebrate the end of his university term.

“It was Christmas so I thought I would try the Christmas tickets, and people always buy the BIG SPIN tickets,” recounted Singh.

THE BIG SPIN is a $5 Zing ticket with one major difference: not only can players win cash prizes in the same way as with a regular scratch ticket, but they can also uncover a “Spin Win” and discover their prize through an animated prize wheel at their local Lotto Spot retailer.

Singh was surprised to uncover a Spin Win after he scratched his ticket – he re-checked his ticket using the mobile app 3 times, before taking it in to spin the animated prize wheel at retail and discovering he would be taking home $10,000 and have a chance with the prize wheel.

“Oh, I was happy,” Singh said. “I’m an international student so going to school is very expensive for me.”

Singh purchased his winning BIG SPIN ticket at the Circle K located on 3706 26th Avenue NE in Calgary on December 17. He discovered his win shortly after and waited patiently for his date with the prize wheel in late April. 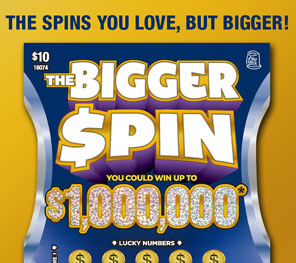