Prince Albert resident wins big on THE BIG SPIN— on his birthday! 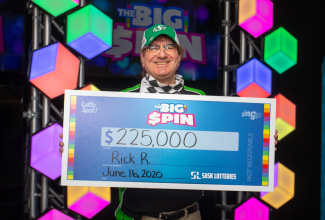 In early May, Ruszkowski took home the top prize on a THE BIG SPIN ZING ticket, netting him $10,000 plus a chance to spin the wheel to reveal his final prize. He’s now enjoying a $225,000 windfall after his spin on June 16 – which also just so happens to be his birthday.

“I was hoping for something in the middle, so I’m happy with that,” Ruszkowski said of his spin.

The happy winner bought his $5 THE BIG SPIN ZING ticket from the 7-Eleven at 215 15th Street West in Prince Albert. Ruszkowski is a frequent ZING player, but he doesn’t usually play THE BIG SPIN – the reason he picked it this time was pretty simple, though.

“They were sold out of all the other scratch tickets,” he laughed. “It was all THE BIG SPIN tickets in the display, so I asked the clerk to pick out one from the middle for me.”

THE BIG SPIN is a $5 Zing ticket with one major difference: not only can players win cash prizes in the same way as with a regular scratch ticket, they can also uncover a “Spin Win,” and discover their prize through an animated prize wheel at their local Lotto Spot retailer.

Prior to his spin, Ruszkowski said he was still thinking about what he’d do with his final prize, and planned to put it in the bank for now.

“I don’t want to blow it,” he said, noting that he might use some of the windfall to help out his mother and look into buying a house.

Sask Lotteries is the fundraiser for more than 12,000 sport, culture, recreation and community groups.