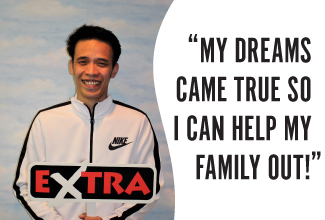 Lex Vipinosa tried to keep his excitement to himself when he found out he had won $100,000 on the September 20 EXTRA draw. But the Lloydminster man had to check and recheck his LOTTO MAX ticket before he really believed the good news.

“I checked it on the self-serve ticket checker, and I froze,” he said. “I was shocked to see all of the numbers come on the screen.”

“I didn’t make any noise; I just scanned the ticket again and took a picture of the screen,” he continued. “I had to make sure I wasn’t just seeing things!”

“I couldn’t believe it!”

Vipinosa said he has one main plan for his winnings.

“I’ve always tried to help my family,” he said. “Now I can really help them – my dreams have come true!”

Vipinosa purchased his winning ticket at the 7-Eleven Food Store located at 3627 50 Avenue in Lloydminster. He won the second-highest EXTRA prize by matching the last six digits of the drawn EXTRA number – 4000012.