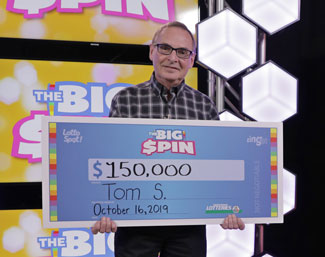 Thomas Staseson is Saskatchewan’s newest top-prize winner on THE BIG SPIN! The Regina resident was thrilled when he discovered his THE BIG SPIN ticket won a $10,000 prize; he was even more thrilled when the prize wheel came to a stop and revealed a $150,000 prize at his Big Spin event on October 16.

THE BIG SPIN is a $5 Zing ticket with one major difference: not only can players win cash prizes in the same way as with a regular scratch ticket, they can also uncover a “Spin Win”, and discover their prize through an animated prize wheel at their local Lotto Spot retailer.

Staseson purchased his winning ticket at Canadian Tire Gas Bar, located at 4350 Albert Street in Regina. He scratched his ticket right away and then gave it to the clerk to find the result of his Spin Win.

“I assumed the Spin Win would be $10 or $20,” he remembered. “So I was shocked when the wheel on the screen landed on the Big Spin! I couldn’t believe it!”

Staseson received his initial $10,000 payment in late September. And when the big wheel stopped spinning on October 16, he added another $150,000 to his total THE BIG SPIN prize.

Asked of his plans for the windfall, Staseson said he already had a family cruise planned for this winter, and that he plans to continue to save for the future.

“This will help to pay some bills and make the road to retirement a little more golden,” he said.