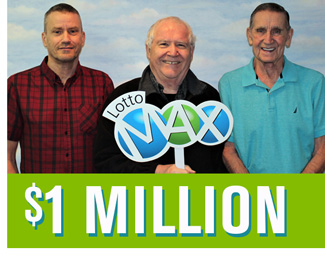 Marcel Lacoursiere knew as soon as he checked his lottery ticket that it was a winner. But when it came to how much it had won, he was off by a factor of 100. Instead of $10,000, the ticket in Lacoursiere’s hands had actually won $1 million on the January 3 LOTTO MAX draw. Lacoursiere claimed the prize along with his friends Ron Thomson and Aaron Bond.

The three former co-workers said they’ve played the lottery together for almost two decades. Their winning ticket was a LOTTO MAX quick pick eligible for draws from October 22, 2019 to January 14, 2020. They bought the ticket at Forest Grove Confectionary, located at Bay 1, 415-115th St. East in Saskatoon.

Lacoursiere discovered the win when he checked the ticket at another lottery retailer in mid-January. The three men won one of the 26 MAXMILLIONS prizes drawn on January 3, exactly matching the winning numbers 3, 15, 16, 22, 29, 39, and 49. The 25-draw ticket also won four free plays, along with small cash prizes totaling $24. It was those other cash prizes that threw Lacoursiere off, he recalled.

After re-checking the ticket with the store clerk and realizing how much the group had won, Lacoursiere called Bond at work.

“I was a bit preoccupied for the rest of the day,” Bond remembered.

Together, Lacoursiere and Bond went to see Thomson to fill him in on the news.

“They told me they were coming to discuss if we should keep buying tickets,” Thomson said. “They said there was a bit of a win, but they didn’t tell me how much. I was flabbergasted!”

All three winners said they would share some of their good fortune with their families, support the charities that are important to them, and put some away for the future.

“It gives us some peace of mind,” Bond said.

Saskatchewan Lotteries is the main fundraiser for more than 12,000 sport, culture and recreation groups in communities across Saskatchewan.