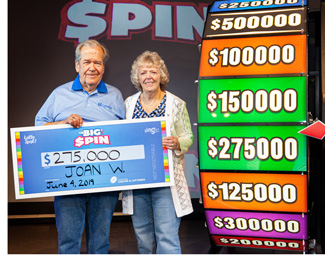 Joan Woodward of Winnipeg is Manitoba's second Big Spinner! She was elated after spinning the Big Spin prize wheel and winning $275,000.

THE BIG SPIN is a $5 lottery ticket with one major difference; not only can players win cash prizes in the same way as with a regular scratch ticket, they can also uncover a “Spin Win” and discover their prize through an animated prize wheel on the screen at their local retailer.

Woodward’s husband purchased the winning THE BIG SPIN ticket for her from Buffalo Bay Marina in Buffalo Point.

She was shocked when she checked her ticket at the store and discovered she won a Big Spin!

“I was surprised,” she said. “I didn’t know exactly what a Big Spin meant, but my husband did, and we were excited!”

“I’ve never won anything like this before,” she continued. “I’m happy to win anything!” 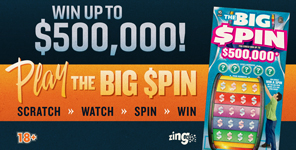